In this project BBB_ conveys on the position of the human in the world of trans- & post humanist thought, body and mind enhancement techniques, general artificial intelligence and its emotionality and irrationality, biotechnology, robotics, and the dystopian philosophy of the future that already happened.

The physical release of the ID RATHER BE AN IPHONE music album (saasfee*rec.) is a 40-pages interactive augmented reality piece, designed as a timeline to the 30 min length of the album. The booklet is music decoded in visual language; a narrative told over the album's 11 tracks. It features videos, animations and alternative fragments of the music, which can be discovered by scanning booklets pages with a camera of a smartphone, with a help of an Augmented Reality app. Smartphone based society is thus forced into utilisation of reality enhancing tools, giving a taste of a cyborg-story to each user of the booklet.

"ID RATHER BE AN IPHONE" was part of Gallery.Delivery: New Convenience | Berlin 2019. 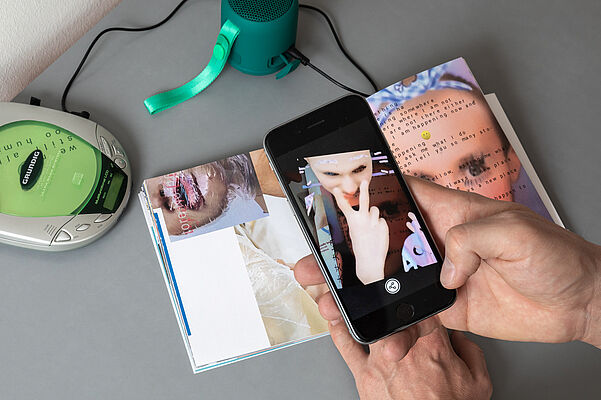