Born in Lausanne in 1991, the Swiss/Dutch artist Manon Wertenbroek obtained her Bachelor of Arts in Photography in 2014 from ECAL (Lausanne University of Art and Design). Since graduating, Wertenbroek has been showing her work in gallery spaces from The Netherlands to Belgium, Italy to France, with appearances at Art Basel, Amsterdam's Foam Museum and Rome's Swiss Institute. Her work focuses on portraiture as a symbol and vehicle to explore questions of introspection, identity, social interaction, and emotion. Her work has been featured in publications around the world including the Guardian, Mousse, British Journal of Photography, Foam Magazine, i-D, LensCulture and more. In January 2017, her first solo show opened at Coalmine in Winterthur, Switzerland. The same year she was awarded a Swiss Art Award from the country's federal office of culture.

Christopher Füllemann is a Swiss artist born in 1983 in Lausanne. He graduated from Lausanne University of Art and Design / ECAL in 2008 where he studied painting and video art, later focusing his practice in installation and sculpture. In 2012, Füllemann obtained a Master in Fine Arts at San Francisco Art Institute/SFAI and received the SFAI Outstanding Award in Sculpture. He was awarded with the Swiss Art Award 2011 and the Gustave Buchet Award in 2013, which included a solo show at the Musée Cantonal des Beaux-Arts in Lausanne, Switzerland. Most recently, Füllemann presented his work at Duve Berlin Gallery, for Museumsnacht Basel 2017 and is collaborating with choreographer and performer Simone Aughterlony.

Born and raised in Switzerland, Julian Zigerli attended the Berlin University of the Arts. After graduating in 2010, he returned to his roots in Zurich to launch his eponymous label. JULIAN ZIGERLI stands for practical, smart and technically first-class pieces with a sporty touch. Love, colour, humour and positivity are core to the brand's ethos. The distinctive feature of this label is the way it unites extrovert prints and striking colours with comfort and wearability. Celebrated within the world of design since his debuts, Julian Zigerli has presented his collections around the globe, in cities such as Berlin, London, Zürich, Milan, New York, Paris and Seoul. Ever since, he has been enjoying success both locally and internationally as well as being granted with multiple fashion awards. 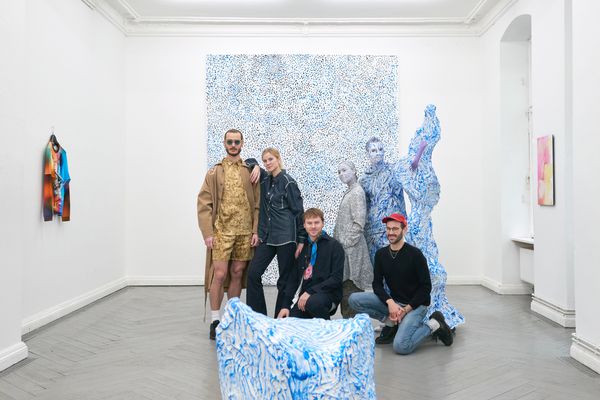 from left to right: Manon, Julian and Christopher
1 /
✕